Our Fall LED Lighting Sale in On Now!

All LED Headlight Bulb Kits are on sale.

We are on a quest that has evolved over the past several years. Sometimes changes come in great leaps and at other times changes are more minor and subdued.During testing for our latest series of LED Headlight Bulbs we noticed a few large leaps. The first is in the light output of the X9 LED headlights. They are rated at an astronomical 10,000 Lumens per bulb making them the first ones we have tested that are brighter that HID Headlights. Secondly, we noticed an improved beam pattern and focus which translates into more light on the road and a vastly increased night driving experience. These two factors are a huge game-changer in the world of LED lighting. They also incorporate the adjustable base feature which is necessary to get the most light on the road in various headlight housings. The design of these lights allows them to be used in most Canbus applications and the Intelligent temperature controller system keeps them operating at the optimal temperature for increased life.SpecificationsWattage - 45 wattsCurrent draw - 2.0 Amps (+/- 0.2A)Voltage - 9 to 32 Volts DCLife Expectancy - 30,000 hoursLight Color Temperature - 6500 KWarranty - 3 Years

F3 bulbs were the original style of this series released in the spring of 2019, They have been replaced with the X9 which are virtually identical except for the silver body colour instead of the red colour of the F3, We have opted to keep using the F3 designation on these bulbs to save confusion during inventory and shipping.

X9S were released in early 2020. They are the same output as the X9 but they have built in Canbus circuitry and a slightly larger body.

X9Spro series were released to market in 2021, they have a larger body than either the X9 or X9S and feature dual copper pipe cooling for great heat dissipation in extreme conditions

All three series feature our 3 year warranty and 10,000 lumens of output per bulb although there is some information stating the X9Spro has 12,000 lumens of light output our testing has not shown a large difference in light output so we continue to advertise them as 10,000 lumens. We do not believe your choice of bulb selected in these 3 series to be based on light output but rather on which body size is better for your application. 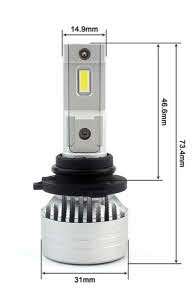 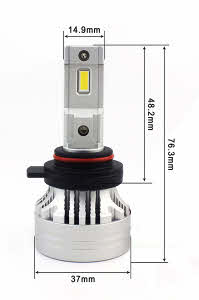 We stock these in all available bulb styles and these are our standard recommended bulbs to use in most applications. 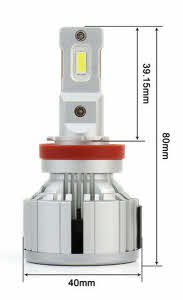 We stock these in 9005 and H11 styles. Our main intended application for the X9Spro series is hiway tractors which have ample room and typically have headlights on for extended time periods

This Website is operated by Super-Bee Truck Accessories. We are located in Wetaskiwin, Alberta, Canada and ship all products from our warehouse and stocking facility; as such, all product pricing listed on this site are in Canadian Dollars. By ordering the products you're looking to purchase through us, you will never have to pay those annoying duty and brokerage charges - we take care of that for you by stocking many products and ship them out from our Canadian warehouse.

To apply for a wholesale account fill out this form.

Thanks for shopping and hope to see you back soon.